Laughter In the Rain

I had just knocked on Mrs Rosewood´s door when I heard her laughter in the rain. The doors to the garden opened right next to her little apartment and the sound of laughter had come from there.


She was just entering the building, waving a cheerful goodbye to someone from under her bright orange umbrella.

- Ah, I made it just in time it seems! she smiled and walked in, leaning to her cane.

I had her lunch in my trolley and waited
for her to open the door. 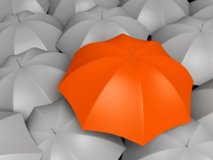 - There you go, she said and opened the door, - You may put the food on the kitchen table. I´ll warm it up in the microwave shortly.

I took her meal and carried it indoors. The route to her small kitchen took me through her living room. As before, I couldn´t help glancing at the pictures on her living room walls.

Other people living in this old people´s home had traditional landscape paintings or religious pictures on their walls. But not Mrs Rosewood. Her walls were filled with pictures of comedians. The Marx Brothers, Laurel and Hardy, Jim Carrey, Leslie Nielsen, Steve Martin, Goldie Hawn.

- You are looking at my picture, I see, Mrs Rosewood´s cheerful voice came from behind my shoulder.

- Isn´t it obvious? I like to laugh! Look here!

The old lady opened the cupboard next to her television. I saw films, dozens of them. All comedies. No Casablanca, Gone With the Wind or any such old film. Only comedies.

- Not a hobby but a way of life, young man! she smiled.

I did not know what to say. She turned to push the window open and laughed. Again I head her laughter in the rain.

- I had very serious parents, she said, - Very religious. I was taught ever since I was a child that life was dire business and useless laughter took you nowhere. Nowhere good that is. Unfortunate for them I did no believe, she laughed.

- When I was a teenager I became acquainted with a neighbor of ours. She used to be a nun.

- Used to? This sounds interesting.

- Yes, a bit like Maria in Sound of Music, Mrs Rosewood smiled, - I asked why she was nun no more and she said it was too gloomy.

I talked with her and she knew what my parents thought about laughter and being happy. And one day she started talking about laughter.

"Mary, tell me how do you feel when you laugh."

I told her I felt happy.

"How do you feel when you know you are totally loved. Totally."

I wondered how could she know I was up to my ears in love with someone. But I answered her that I felt happy.

"And have you heard someone say God is total love?"

Well that was easy. I had sure heard it many times.

"Well tell me then - if someone is total love, totally made of love, how would he feel? Happy, of course. What do happy people do? They laugh. So if God is total love, you might expect God laughs a lot. Why then would laughter be bad?"

Now here was a question I had not thought about before.

"And tell me, Mary, why would it not work the other way around too?"

Mrs Rosewood turned into her kitchen and left me standing there. I waited for a short while and then had to ask.

- What did she mean by that?

Again I heard her laughter. In the rain, a blackbird was singing beautifully.

- I thought you´d never ask! she appeared back into the living room, - So I´ll tell you what she said.

"Dwelling in negative thinking and complaining about things are just ways to tell you don´t trust life can be good. In other words you are stating your distrust to your creator.

So think about it in such a way that you may search for happiness and laughter purposefully. It gets you closer to God, who is laughter, joy and happiness."

Now she used the word God, but if you are happier with some other term, no problem. She meant the creating force of the universe, Mrs Rosewood said, - Have to be careful with other people´s faith...

- Yes indeed, she smiled, - But that is when I started to find laughter on purpose. My parents did not approve and told me so. I was stubborn enough to continue. I bought funny books. I went to see funny movies. I wrote down the best jokes I found. And this week... Oh this is so much fun... I found out there is such a thing as laughter yoga! I´m going to try it next week!

- Oh it is just laughter. Laughing on purpose, no one needs to bend themselves into a knot, Mrs Rosewood laughed, - And time has taught me I took the right road! I met my husband at a movie theater when I went to see a Goldie Hawn movie! Not to mention other friends I met through laughter.

She bent towards me.

- You see I am following the advice of the neigbor... I inherited that cross stitch picture from her.

I looked at the picture above her TV.

"The Purpose of Life is Joy" it said.

- She gave it to me shortly before it was her time to go to her maker and said: "Look at this and remember it. Always try to be the sound of laughter in the rain. Life is so hard to so many people it is like an eternally continuing rainy day. They are not happy. So you be happy, show them the way. Be the laughter in the rain for them. Be as happy as you can - only then you can spread happiness to others."

Even though twenty years have passed since that rainy day, I´ll always remember Mrs Mary Rosewood. We became good friends and she often invited me to watch funny movies with her. I met many of her friends and we spent many a laughter-filled evening together. There was a lot of laughter in the rain and in the sunshine.

When Mrs Rosewood died, she donated all her money to a local theater with the instruction the money was to be used to produce one comedy play per year. Guess what the first play was called? Laughter In The Rain.

To me she gave all her funny movies and pictures of her "funny people". I still have them hanging on my study walls - all faded with time of course, but just as valuable as ever. Their smiles haven´t faded at all.

And when I look at the cross stitch message "The Purpose of Life Is Joy" I always remember the first time I heard her laughter in the rain. And to honor her life´s work of bringing joy to the people around her, I try to be the sound of laughter in the rain to others as well.

So how about trying to find joy in your life on purpose? Get yourself a notebook and write down the best jokes. They amuse you - and with that notebook you are always ready to cheer up a meeting with friends!

Back to Homepage from Laughter In The Rain