One Step at a Time

or the making of Rose Island

It had been a tiring day. There were four of us in the car - and we were talking about a challenging situation that had come up at work. The bank would not give us a loan that we seriously needed to continue our business. Frankly speaking the very survival of our company was at stake. We knew we had a chance to put things right, but it would take a huge amount of work - and luck. 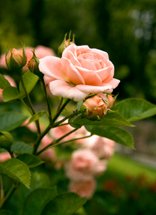 - The task is impossible, Mary finally said, - What´s the point in even trying. We´ll never succeed.

John, the eldest of us all, was driving the car. He hadn´t said much the whole time. But now he suddenly turned off the main road.

- Hey! What´s this? We need to get home! we protested.

We did not understand what could have been wrong with the car - it seemed to be running perfectly. But it was his car, so he ought to know. We returned to discuss the impending doom.

I gazed out of the window. The road went downhill for a long time. The terrain was rugged. I could see big trees - their form told of strong winds and drought.

Then a lake came into view. It was a big lake, dotted with tiny islands. There was a small village at the edge of the water. I had never been around here and would have enjoyed the view if I hadn´t been so worried.

John drove to the small village and sure enough - there was a garage there. A young man walked out when he saw us.

- John! Good to see you! He shook hands with John, - Problems with the car?

They walked indoors. We didn´t want others to hear about our problems so we just stood there, hoping it wouldn´t take long to repair the car.

- The garage owner borrows his. I´ve used it before.

Well - there didn´t seem to be much else to do so we headed for the pier. There was a big, old fashioned motor boat. We got into the boat and John started the engine. The motor gave a deep roar and the boat glided effortlessly over the water. It was a bit windy, but not too much. The sun was peeking from between the clouds, painting brighter spots on the otherwise grey water. In other circumstances we would really have enjoyed this little boat trip.

John seemed to know where he was taking us so we just sat back and breathed deeply. The boat curved around the islands so that eventually we lost track of time and location. Then there were no more islands - except for one, a long way from the shore. It didn´t seem to have much vegetation. John headed right to it.

When we got nearer we saw an opening on the side of the island. Not a cave, but a deep crack in the rock. John carefully steered the boat through to the calm waters inside the island.

We gasped in awe. The island was circular in shape, the terraced slopes rose all around us. A natural harbor right in the middle of it was a real haven - no wind could reach this place. The waters were calm and small fish could be seen swimming under the boat. From the lake you would never have guessed there were so many trees inside the island. Lush green trees - but that was not all.

Roses. It was like someone had poured the colors of sunset inside the island. Veils of red, pink and white cascaded down the slopes. There must have been hundreds of rose bushes there. Butterflies and little birds were everywhere. The first touch of autumn had already started to color the trees with red and orange and they were aflame against the blue and white of the sky. It was so beautiful it was almost like we had somehow landed in a fairy tale.

We just sat there in total silence, surrounded by the wonderland of roses. Then John spoke.

- I wanted to bring you here to tell you a story. In the past this island was barren. There were some trees here, but that´s about it. A young fisherman lived here. You can see his little house over there.

John pointed at a little house behind the trees.

- One day he met a girl he wanted to marry. But he knew no young woman would want to live so far away from the shore on such a barren island. But he was a fisherman and knew no other way to make a living so he would have to stay on the island.

- Love is a mighty thing… This your fisherman decided he would make the island beautiful enough to the young woman in question. He made a plan. He bought a beautiful rose and some earth and brought them to this island. He planted the little rose and took the best care of it - and when the next summer came he noticed a big flower bud. When it began to open, he took his boat, fetched the girl and took her to see the beautiful rose. It had just opened, a deep red beautiful rose - the only speck of color on the island. He asked her to marry him and told he would love and take care of her, just like he had taken care of the delicate rose. He would make her life beautiful. She answered there was no need for roses - life was beautiful to her just because he was there.

And so they married. Years passed and they were young no more. They raised their children, they worked together. Life was hard but they were happy.

The fisherman never forgot his promise. From the day she said yes to his proposal, when ever he went out with his boat, he returned with a bucket of earth. When he got some extra money, he always bought her roses - and saplings. They planted them, the trees and the roses, one at a time, all over the island. And so this rocky island turned into a most beautiful garden.

The fisherman and his wife passed away many years ago already, but their roses are still here. They tell the story of their love - and remind us all what you can achieve if you put your mind to it. One step at a time.

John stopped talking. We didn´t want to say anything because that might break the spell of this enchanted island.

- When you say we won´t make it because we didn´t get one loan - think of this island. Think of the young man who started carrying the earth and roses here. This whole island was turned into a rose garden one bucket at a time. Thousands of buckets of earth from all around the lake. He and his wife made this island what it is. The Rose Island.

- One step at a time… I said and John nodded.

- So how about it? Are we going to give in - or shall we start carrying buckets of earth?

We decided we would carry the buckets. And there was nothing wrong with John´s car - he simply had decided to show us an example of succeeding by taking it one step at a time.

It took us over a year of hard work but we made it. Once I asked John how he learned of the story of the fisherman and his wife. He showed me a faded sepia photograph on the wall. An old couple was posing in a studio. He had an old fashioned suit, she wore a scarf.

- My great grandparents, he said, - His name was John. Can you guess what her name was?

I looked at what she was holding in her hands. A big… And I guessed right.

The method of one step at a time

Like they say: Rome wasn´t built in a day. The journey of a thousand miles begins with one step. Take it one step at a time. We´ve all heard these sayings.

We all meet situations and goals in life that feel overwhelming. If the task seems too big for you to handle, divide it into smaller parts.

1) Write down the end result.

2) Then write down the major steps that need to be achieved before the goal is reached. Write them down one step at a time.

3) And then just take one smaller goal at a time. Write down what needs to be done to achieve them, one step at a time.

4) Make notes when these smaller steps need to be ready. And then start working on them according to the deadlines. (Yes, one step at a time.)

The trick is to break the huge task into smaller parts that are easier to understand and handle. And: ask for help if you need it. No point in exhausting yourself if there are people around to whom you could delegate some of the tasks.

We can achieve big things, when we put our minds to it - and take it one step at a time.


Back to Homepage from One Step at a Time

Back to What Is Success from One Step at a Time