or The Royal Gardeners

Here is a short story I wrote about work attitude. An inspiring short story of a king, a queen and two gardeners.

Once upon a time in a small kingdom there lived a king and a queen. They had a charming castle and they both had their own beautiful gardens. But as the affairs of the kingdom took so much of their time, they realized they did not have enough time to work in their gardens. So it was decided they would hire gardeners.

The word went out and on the
appointed day two applicants appeared in front of the royal couple.

One was a charming young man. Well dressed, shiny shoes, well tended hands and perfect manners. He bowed down to the floor and breathed out his absolute enchantment over the fact that he was allowed to be in their dignified presence.

The other one was a scruffy looking older man who just took his hat off and nodded to them briefly.

The king looked at the older man disapprovingly and started interviewing the younger man. He wanted to hear what his work attitude would be. Oh the plans he had for the king´s garden!

- I shall have a through look on the garden, your highness, the young man assured, - And I will make the best of plans. Once I am finished, your garden will be a marvel to see - it will be fitting for a king!

The queen was left to talk with the older man who did not say much when asked about his work attitude.

Not that he was impolite, but he just did not seem to believe in talking too much.

The king and queen asked the two men to go outside for a while and talked.

- Well you would, wouldn´t you… the queen seemed amused.

- What do you mean? He is very polite and has great plans fit for a king´s garden! His work attitude is perfect!

- Well, I didn´t care much about him, the queen said, - I think I would be happy to have the older man as my gardener.

- Perfect! The king was happy, - It is settled then! I take the younger man to be my gardener and you can keep the grumpy older man. I am sure my gardener´s work attitude is much better than your gardener´s.

And they invited the two men inside and told them the good news.

After a week the king eagerly went into his garden to see what had been done. He almost tripped on the old gardener who was pushing a wheelbarrow full of rakes, watering cans and flower pots towards the direction of the queen´s garden. The old gardener just kept of going, not minding the hurt feelings of the king.

- Really, the rudeness… the king said.

The young gardener was sitting in a comfortable chair with a wine glass in his hand, observing the view. His clothes were impeccable, not a hair was out of place. He put a small mirror back into his pocket when he saw the king coming.

- Why aren´t you doing anything? The king wanted to know.

- Oh but I am, I am, oh excellent king! The young man bowed down in front of him, - I am making the first plans in good time. No need to rush into things, it´s only spring!

- Oh yes, of course, one needs to make good plans, the king agreed, - Good work attitude, that. Carry on the good work!

And he walked away. Someone was digging earth behind the hedge that hid the queen´s garden from view.

A few weeks later he came back from a state visit and went to see his garden. On the way the old gardener stumbled upon him - he didn´t see anything from behind the big sacks of good earth he was carrying.

- Unbelievably impolite! The king snorted and wiped off dirt from his velvet jacket.

The young gardener was still sitting in the chair. This time he had a fashionable hat in his head, because the sun was shining strongly. The garden looked just the same as before - a bit more overgrown perhaps.

- Why haven´t you done anything! The king asked, - The summer is at its most beautiful and you have let the garden go wild!

- Oh but I am doing a lot! The young man got up from his chair and politely offered it to the king.

The king sat down and the young gardener showed him scrolls and scrolls of drawings of different kinds of gardens. The king was pleased to see he had so many plans.

- No point in starting work that would have been done in vain, the young man said, - If I planted flowers there and then the next day would have to dig them up again, surely that would be a waste of everyone´s time!

- I am sorry to have said such harsh words to you. Your work attitude is as good as it was before, the king said, - Keep up the good work!

And the king left. He could hear the sound of lawn being mowed behind the hedge.

The weeks passed, and the king was very busy. The summer was nearing its end when he had time to go into his garden again. He was certain he would see it just perfect. To his amazement nothing had been done. Nothing at all. The weeds had taken over the flower beds, rabbits and deer had eaten at will and the pond was green with algae, fish gasping for air.

- This is too much! the king said, - Gardener! he yelled.

- It is no such thing! The king´s voice was shaking with anger, - You have let my garden go to ruin! Explain yourself!

- No such thing, majesty, the young man smiled, - The task simply was too big for one man. You see I finally decided what plan was best to build the best garden there is. It requires a lot of work. But it is already so late in summer there is no point in hiring gardeners this late in the year to make the plan real. So I postponed it till next year. But just wait to see how splendid it will be! Here, I will show you…

The young man took out an especially impressive looking scroll of parchment with official looking seals and a velvet rope with red tassels.

- The plan for the royal garden… he said proudly, - Now let me…

- No! The king stomped his foot, - No! I just wanted to have a pleasant garden where I could relax and enjoy nature and you managed to ruin the one I already had! I do not want to listen to your great plans. I want you out of here! I thought you had the best work attitude, but it seems you never intended to work in the first place!

- Really, the young man looked at the king in disbelief, - If you did not want to have the best of gardens, you should have said so in the beginning. I shall be taking my leave now and find a better master who will appreciate my talents more! To say I have a bad work attitude... Unbelievable! Good day, sir!

The young gardener made a dainty turn and walked away, cheeks burning red, chin held up high, tears of disappointment in his eyes.

- Really, the king sighed, - How could I have been so stupid!

He could hear someone raking the lawn behind the hedge. He looked at the sorry sight that had been his lovely garden. 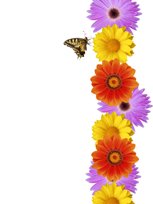 - Dear, he heard the queen´s voice from her garden, - Why wouldn´t you come over to my garden to sit down and relax?

The king turned, and dragging his feet he walked to the gate that led to the queen´s garden. The old gardener opened it for the king, and nodded when he walked in.

The king stopped, absolutely amazed. The queen´s garden was so beautiful. Flowers were blooming everywhere, not a weed in sight. Trees were bearing fruit. Beautiful lanterns were hanging from the branches in the darkening evening. Butterflies were flying around. The pathways were
clean and raked, the fish pond was well tended and you could see the red and white koi fish happily swimming around. The lawn was short and fresh.

- Here, have a glass of strawberry juice, the queen offered a glass of delicious drink to her husband the king.

- How did your garden turn out to be so beautiful? The king asked.

- It´s all about the work attitude of my gardener, the queen smiled at the older gardener, who nodded and turned to continue his work, - I knew he would be perfect the minute I saw him!

- But how is that? The young man had much better manners! He looked so pleasing to the eye and his hands and clothes were well tended and clean. Obviously he had the best upbringing! How could I have misjudged him so badly?

- My dear. Considering the job we had to offer, the only thing I looked at were their hands and trousers.

- Hands? Trousers? The king did not understand.

- We were about to hire gardeners, not diplomats. Didn´t require much logic to see which one had better work attitude to be a gardener. You see - your young man´s hands were spotlessly clean and well manicured. My old man´s hands were black under the fingernails. But most of all: your young man´s trousers were worn from the behind. My old gardener´s trousers were worn at the knees.

The queen sipped her strawberry juice.

- So which one do you think had the better work attitude to be a gardener?

So what was the difference in work attitude between the young and the old gardener? The older one realized that in order to get things done you need to start working.

If you try to plan things too much, to take every little detail into account, it just may be you never get to the actual job at hand. You get paralyzed by the sheer amount of details you should master beforehand.

So plan, yes, but pretty soon start working on your plans as well. You´ll can hardly have every single detail planned ready before you start. Understand that even the best laid out plans have a life of their own. Unexpected things can happen and change you plans. So make an overall plan and work the details as you go along. That way you get the project started at least.

Often someone who seems to procrastinate is a perfectionist who wants the security of a perfect plan before they start. They are trapped in their idea of perfection. Don´t fall into that trap. Plan - and then take the first step to bring your goal into reality.